The Ven Hypothesis has been published! The ebook is now available on Amazon for Kindle and Kindle Unlimited. Paperback is coming soon, but I have to wait for the proof to arrive and make sure it’s beautiful before I release it into the world. 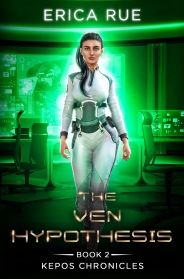 The Vens have landed on Kepos, and we’re all going to die.

The thought races through Dione’s head. Without a working jump drive, she and her friends are trapped on Kepos with the quarreling colonists. As the Vens prepare to attack, the two opposing settlements, the Aratians and Ficarans, are too busy feuding to take the threat seriously. If Dione can’t get the colonists to work together, the Vens will end every single life on Kepos, including her own.
She knows she can’t save everyone, but can she save anyone?

I just finished my final read through of The Ven Hypothesis and have seen the final version of the cover, which I love! Things are coming together. With a little formatting magic, the ebook will be released by the end of the year, and the paperback will come out shortly after.

As for The Curator (anthology) I’ve seen a proof copy, but I’m not the one who hits the publish button. I imagine it will be out very soon.

Well, I have good news and bad news. The good news is that The Ven Hypothesis is with my wonderful editor and will be out by the end of the year. The bad news is that I’m missing my October deadline.

Before you judge me too harshly, I had a baby September 1st. I underestimated how miserable and lethargic I would be in the last few months of pregnancy, and then I gave myself a few weeks after his birth to focus on figuring out how to take care of a tiny human. But things are getting back on track, and unless my editor tells me the book is complete trash, it will be out before Christmas! Hopefully, well before Christmas.

If you’re looking for some good sci fi shorts in the meantime, The Curator, an anthology, will be out this month, and it will feature one of my short stories. I’ll add the link when it’s live!

The Kindle version of The Kepos Problem is on sale for the next week (July 14-20) for just $0.99 on Amazon (US & UK stores). Here’s the link. It’s also available in paperback. If you have a minute, don’t forget to leave a review!

The second book in the series, The Ven Hypothesis, is back from beta readers, and after some editing it will be out this fall, October 2018.

Dione Quinn is a biology nerd, not a fighter, but when a school research trip goes wrong and the Venatorians attack their ship, she doesn’t have much of a choice.

In fact, she has even fewer choices when her best friend, Lithia Min, jumps them to a planet outside the Alliance-protected Bubble. They’ve escaped for now, but they are stranded where no one will find them and one of her classmates has been injured in the attack. The only thing that can save her is on the uncatalogued planet Kepos.

As Dione discovers the truth about the planet and the lengths to which she must go to save her friends, Kepos presents a problem. One that will force Dione to decide: what is her future worth?